At the Wheel, Yiyar Salvage rents and operates a cargo bay that they use as a distribution center for equipment and parts shipped elsewhere in the galaxy. They are aggressively expanding their sales operations beyond the scrap yards. They recently started holding auctions at the cargo bay as well as selling items directly to merchants and mechanics at the Wheel. Their patrons generally dislike them, but remain paying customers thanks to low prices.

Yiyar Salvage is owned and dominated by the Yiyar clan, but the company incorporates non-Rodian crew, associates, and allies as well. Yav Yiyar oversees the Wheel operations and advance scouting missions. To improve their return on salvaged technical parts, Yav extended operations into custom and black-market technology sales a few years ago. Yiyar’s belligerent and threatening style, combined with his company’s cut-rate prices, ignited a feud between Yiyar Salvage and the long-established tech operations, IsoTech. Confrontations between the two are always heated, and they often turn violent in deep space and otherwise out of sight of the authorities. 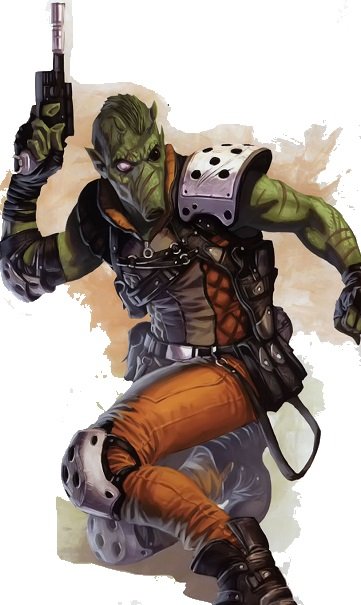 Yav Yiyar is number three in Yiyar clan hierachy, and number two in Yiyar Salvage. He captains the Nightflyer and is an excellent advance salvage scout. He leads by example, and his approach to any given situation is mirrored by those Yiyar clan members with him.

Unfortunately, Yav is rude, crude, and generally horrible to his allies and everyone else. Yav is very excited about the Sa Nalaor, and he takes every advantage and opportunity he thinks he can get away with to find the ship first. Successfully locating and securing the Sa Nalaor could promote Yav to number two in the Yiyar clan hierarchy and give him command of Yiyar Salvage. He also dreams of depriving the hated IsoTech of its prize.

A rough-looking Rodian, Yav’s head is topped by a short green mohawk. His right eye is a cybernetic replacement, and tattooed stripes cover his face and arm supposedly marking every salvage job he’s flown — as well as giving the Rodian a fearsome mien.

“Too Low” Talo is the Sullustan second-in-command of Yiyar Salvage’s Wheel cargo bay. Publicly, he was hired to help expand Yiyar’s operations at the station and smooth over relations with customers. He secretly disrupts their competitors’ operations, from orchestrating minor diversions to bribing officials to hinder them to sabotaging them outright.

Talo is heavily scarred about the heads and hands, having suffered injuries in numerous illegal operations and a fair number of fights with Imperials and lowlifes alike. He is loud and overbearing, surprising many larger species with his quick temper and toughness. Rumor has it he’s stared down Wookies and won arguments with Hutts out of sheer tenacity. Talo’s nickname comes from an unfortunate accident in which he overestimated a speeder truck’s total capacity during a fast getaway. He plowed a load of illicit goods into a canyon rim instead of into the open cargo bay of the waiting smuggler’s ship parked above it.

Most Yiyar clan members are self-centered or, at best, focused on internal politics and power struggles. Yav’s associates are loyal to him and see the Sa Nalaor as a huge opportunity to raise their status. Four serve aboard the Nightflyer, and a dozen more live on the Wheel and operate the Yiyar Salvage cargo bay, auctions, and sales.

Otol Nal is the first mate of the Nightflyer. She is tough and greedy, which is alternately encouraged and checked by Yav. She hated it when Yav brought Talo into the company, and especially hates that he brought his Trandoshan crew with him.

The mechanic and salvage expert, Apoto keeps the ship operational and appraises shipwrecks’ salvage value and complexity of retrieval. He and Lasan have long secretly purloined small, expensive salvage items for their own use and sale for quite some time now. If their side scheme were ever to be discovered, Yav and Otol would throw the pair out as thieves.

An accomplished scout, Lasan takes the lead in scouting wreckage and salvage sites. He operates without close supervision, enabling him to claim items before Yav and the others arrive. Though he is arrogant about his skills, his abilities are only average, and he takes offense at any suggestion that he doesn’t live up to his billing. Yav puts up with the charade, but Otol goads Lasan about it.

Eshon is employed as a guard and general crew member. He provides protection at the ship and keeps watch over others while they survey a salvage site. He’s paid to guard his coworkers from outside threats, but he doesn’t act as internal security unless expressly ordered to do so by Yav.